The splendid weather has to end 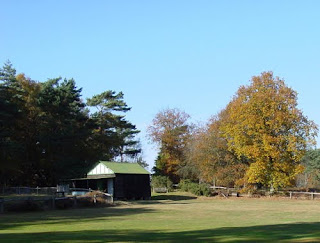 Although no records have been broken, this month will be remembered for many dry, sunny and pleasantly warm days, and of course the exceptional heat at the beginning of October. At the moment it is the driest October since 1978, although rain tonight looks like changing that. October 1978, despite being a dry month, was not particularly sunny, and although days were often warm, nights were sometimes quite chilly. The cool nights have been a feature of recent temperature statistics this October, and that has dragged down the temperature averages. Therefore, it seems unlikely that this month will hold on to it's 5th warmest ranking (since 1900) . However, the 4 mildest Octobers have all occurred during the last 16 years and Edwardian or Georgian London would have been very pleased with this mild, bright and smog-free month!
Posted by London Weather at 11:57 No comments: 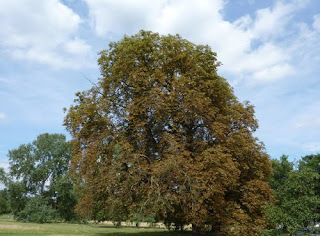 After the amazingly blue skies of yesterday, the clouds have returned. Mustn't grumble, though. This October continues to be the warmest for at least a 100 years but will it last? Well, maybe! Although there have been some fairly warm days, the nights have been chilly under the starry skies. The first real ground frost of the autumn occurred last night, but although there may be some more chilly nights to come, the forecast charts suggest a much more unsettled and windy second half to the month. It should mean maximum temperatures near, or slightly above average, but with nights generally much milder than average under the cloudy skies. So, probably a top 10 spot as a mild October, but number 1 will be more difficult. The mildest October, 2001, only had a monthly minimum temperature of 4.9 (0.7 so far this month!), and there were just 9 days with minimum temperatures below 10 Celsius!
Posted by London Weather at 04:41 No comments: