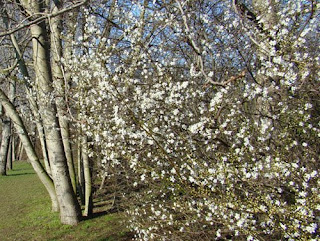 Yesterday, the first significant rain since the 10th March occurred. It marked the end of a very sunny, and mild, spell of weather that has helped to push Spring briskly forward after the relatively cold Winter. In Morden, March is, on average, the driest month of the year. There have been 10 Marchs in the last 100 years when less than 10mm of rain were recorded in the area, the most recent being in 1990 when 5mm fell. The driest March was in 1929 when just 1mm of rain was measured. By way of a contrast, the cold and snowy February of 1947 was followed by a very wet March with 118mm of rain falling in southwest London. It remains to be seen at what end of the rainfall statistics spectrum the final figure for this March will lie.
Posted by London Weather at 01:38 No comments:

When will a cold month signify global warming? 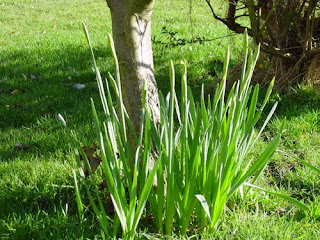 Spring has been rapidly catching up during the recent mild spell, but although February temperatures were below average it was only the coldest for 3 years! Interestingly, the temperatures have been below average in all bar 2 of the last 12 months. A worrying trend towards global cooling? ....er, no. Firstly let's look at these statistics. They relate to a garden in south London and cover the values since 1988, a mere 20 years. Official climatological statistics cover a period of 30 years. The current period that is frequently alluded to by the media covers the years 1971 to 2000. It could be argued that the temperatures derived from these data sets are anomalously high, containing, as they do, more than their fair share of both mild winters and warm summers. However, when figures for the years 1941 to 1971 are compared to those from 1971 to 2000 they show considerable warming, a point not lost to advocates of global warming. In 2 years time the latest set of averages will appear, and they will probably show further warming. The tyres on the global warming bandwagon may then begin to deflate as monthly comparisons with the new figures are increasingly likely to show 'cooler' months unless there is a consistent temperature rise. It could become a very frustrating time for politicians trying to persuade a sceptical public that a 'cold' month would have been defined as a 'warm' month 30 years ago!! By the way, the period February 1900 to December 1902, a total of 35 months, only produced 6 months with above average temperatures.......but that was long before global warming.
Posted by London Weather at 03:32 No comments: