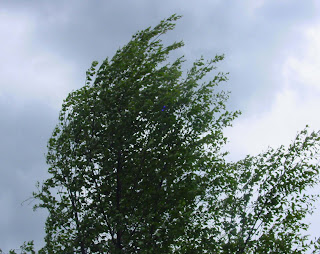 April was the 3rd warmest in this area since before 1900, BUT, the temperature failed to reach 70 Fahrenheit (21.1 Celsius), the much quoted value favoured by the tabloid media. So far, the maxima have not exceeded 21 Celsius this month either, and that is more unusual. In 20 years of records in Morden, the temperature had always reached 21 Celsius by this time of year. As the blustery northeast wind continues to bend the trees under cloudy skies, there seems little prospect of higher temperatures in the immediate future. A scan through the records reveals 1975 as the last year when the temperature stayed below 21.1 Celsius until the end of May but, after a cold start to June, that Summer became very good. Prior to that, the year 1972 had no maxima above 21 Celsius by the end of May, but the June of that year also had no highs above 21 Celsius! The June of 1972 was the coldest of the century, and the rest of the Summer, although dry, was unpleasantly cool.
Posted by London Weather at 04:06 No comments: