The worst winter in living memory (depending on age!) 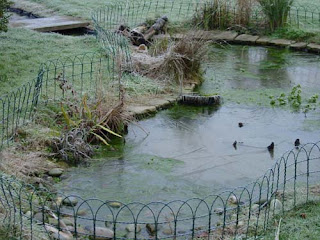 It has probably been the worst winter for reporting weather facts since records began, but what about some real statistics. Okay, that's boring, but with the media telling us that the 'Big Freeze' is over it may be time to put some sobering thoughts together. Comments at the local bus stop range from 'Don't remember a winter like it' to 'Winters were often like this when I was young'. Well, yes, both statements could be true, depending on age. The Met. Office defines 'winter' as the three months December, January and February. In this winter, none of the months have been record-breaking in this area. December was the coldest since 2001, January was the coldest since 1997, and this month, although the coldest since 1986 at the moment, will probably end up as the coldest since 1991 or perhaps 1996. So, certainly no extremes there. The 'winter' started early for the media with October snow around London, and further snow fell in November, although that month, as a whole, was milder than average. Of interest, is the fact that the three winter months (unless the rest of February becomes very mild indeed!) have all been colder than average and the mean temperature is comparably cold with only 3 winters during the last 30 years. There is no way (famous last words!!) that this winter will be as cold as that of 1978/79, but it will probably be the coldest since 1995/96, perhaps the coldest since 1990/91, and maybe the coldest since 1985/86. If colder weather returns at the end of the month, then it will be the coldest winter in this area for 30 years, and for many, many people that's outside of 'living memory'.
Posted by London Weather at 02:02 No comments:

A Rare 'Since Records Began'. 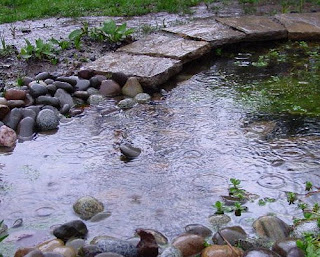 After 20 years of noting the daily weather, it becomes increasingly rare for new records to appear. Yesterday was one of those record-breaking days. The rainfall total, 22.0mm, beat the existing February record, set on the 24th in 2000, when 21.1mm fell. High daily rainfall during February is quite unusual, and in this area a total of 20mm appears to have been exceeded on only 3 more occasions. Namely, in the years
1925, 1933 and 1951. The wettest day was the 13th February 1925 when between 25 and 30mm of rain fell locally. Of interest, but not statistically significant so early in the month, a wet February in this area, with rainfall over 70mm, has only been accompanied by a cold February, with a mean temperature below 4.0 C, on one occasion since 1890, and that was in 1900! Another 18mm is needed to keep the rainfall part of the record at this site, and with a mean temperature of 1.3C, some mild days (and nights) are needed to spoil the other half of the potentially record-breaking equation.
Posted by London Weather at 05:56 No comments:

The heaviest snow in South London since..... 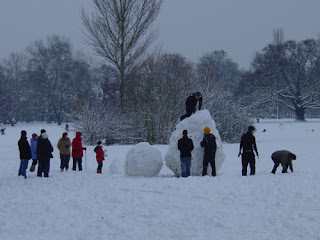 The 19 centimetres of snow that fell yesterday and overnight has got us trawling through the record books. 'The snowiest since February 1991' is a typical quote from the media, but in that month, the Morden area only had 16 centimetres of level snow. Back in January 1987, it was bitterly cold and there were some deep drifts, but again the level snow was only 16 centimetres. Snow stayed on the ground for a while in the winter of '81/82 but not particularly deep, and then it's back to the 'winter of discontent' - 1978/79. Certainly on hills, and particularly in north London, snow depths exceeded 20 centimetres, but not in Morden. Early March produced depths close to 15 centimetres, but December 1962 had heavy snow on Boxing Day http://www.london-weather.eu/article.102.html, followed by further significant falls later in the month. The resulting depth was 25 to 30 centimetres. That's where the record lies.... so far!
Posted by London Weather at 05:54 No comments: