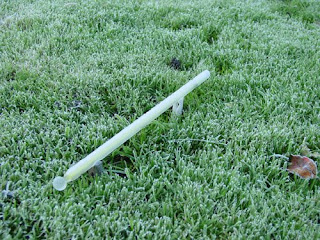 The grass temperature fell to minus 5 last night, the 8th 'grass frost' of the Autumn so far. The minimum temperature forecasts published in newspapers and featured on radio and television broadcasts are, quirkily, based on the expected temperatures in a louvred white box standing in an open position between 1.25 and 2 metres above the ground. Anyone small enough to be sitting in one of those boxes last night would have experienced a temperature of minus 0.3 Celsius, making it the first air frost of the season. During the last 20 years there have been 12 years when air frost was absent during October, but in 1997 air frost occurred on 5 nights during October. The earliest frost was on the night of the 15th/16th October 1993, but in the suburbs of London frost has occurred much earlier in past years. Aside from the notable frost hollows at Chipstead (Surrey) and Rickmansworth (Hertfordshire), one of the earliest suburban air frosts occurred on the night of the 18th/19th September 1952. There was also a frost in southwest London on the 29th/30th September 1919. In October 1888 there were 9 or 10 air frosts across much of London. The lowest October temperature recorded in Morden during the past 20 years occurred on the night of the 29th/30th 1997 when a minimum of minus 5.0 Celsius was measured. A value that could be hard to beat.....maybe!

Posted by London Weather at 04:20 No comments:

Last of the Summer Days? 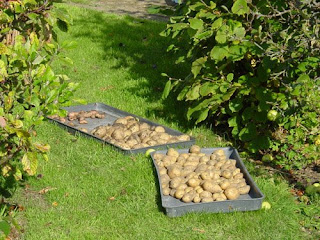 Time to get the potatoes in before Autumn truly arrives. Although temperatures above 20 Celsius in October are not unusual, after the disappointingly cool September in London, this short warm spell is much welcomed. The maximum temperature of 22.2 Celsius today is over 1 degree warmer than any maxima recorded during September, and is the highest this late in October since 2001. There were only 4 days during August that were warmer, 13 days in July and 7 in June. In October 1921, the first 11 days of the month had maximum temperatures above 21 Celsius, and on the 5th and 6th of October in that year the high was close on 29 Celsius at several places in London, including Kensington Palace, Greenwich, Camden Square and St James's Park.
Posted by London Weather at 07:17 No comments: