So, how bad is this summer? 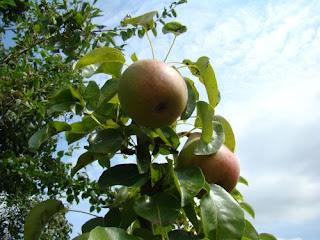 The summer is about two thirds over and there are two schools of thought as to how it is progressing. Some think it is very pleasant with good growing weather. Others think it is cool and wet. Statistics point towards the latter claim....but with reservations! It has been said many times that the manipulation of numbers can often produce the results you want to see and the following figures come with the same caveat. By using a ranking system from 1 to 112, with 1 being the warmest or driest since 1900 and 112 being the coolest or wettest since 1900, comparisons can be made. For example, June and July 1976 were both warm and dry. Using equal weighting, June 1976 produce 1+6=7 and July gave 8+16=24. The total therefore was 31. By way of contrast, the June and July of 1987 were both very poor and produced 86+86=172 for June and 56+92=148 for July, a 2-month total of 320. So far, the numbers for June are 67+94=161 and for July 90+59=149, a total of 310. It can be seen that using basic comparisons of temperature and rainfall, the first 2 months of this summer are up there with the worst of them! Let's hope that August 2011 is less forgettable than the early months of summer.
Posted by London Weather at 03:45 No comments:

Wet, but could be wetter! 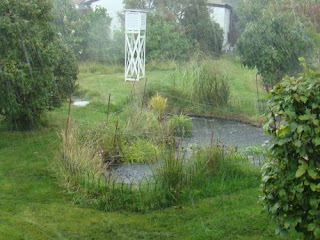 As the rain hammers down again, it looks as if the monthly average for July could be exceeded by the end of today. In recent years there have been several quite wet Julys. In 2009 measurable rain fell on 22 days, and in 2007 over 124 mm of rain fell, including the 41mm that was recorded on the 20th. Some of the most intense rainfall of the year can fall in July, and large totals over a very short time period are not that unusual. Kensington had 25 mm of rain in 12 minutes on the 11th July 1927, and on the same day 37 mm fell in 18 minutes at Balham. On the 26th July 1946 there was a fall of 50 mm in 35 minutes at Kew. Some parts of Greater London have had over 100 mm in 24 hours and southeast London appears to be particularly vulnerable to these heavier falls. Over most of London it looks as if 1918 had the wettest July with parts of southeast and east London recording over 200 mm of rain. West London fared better with only 121 mm of rain at Kew, a figure this month is moving towards; but will it reach it?
Posted by London Weather at 04:39 No comments:

A touch of optimism for July, maybe! 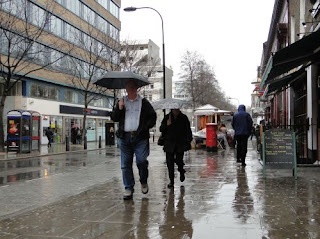 The general consensus is that this July has been poor so far. Statistics bear this out, with rainfall (up to the 10th) already 50% of the monthly average and temperatures the lowest for 23 years. The month has a long way to go and changes may occur. In some years they are marked. For example, in 1980, after a cool and wet June, holiday-makers were hoping for a better July. Alas, the first day of the month brought strong northerly winds, persistent rain and drizzle and a high of only 15. At midday in central London the temperature was only 12! A couple of dry and warmer days were then followed by more rain, and on the 8th another very cool, windy and wet day occurred with the 9th little better. No let up in the unsettled weather occurred until after mid month with infrequent sunshine and afternoon temperatures typically between 14 and 17. Finally, a sunny day occurred on the 21st, and although the maximum was only 19, it was the beginning of a spell of summery weather that lasted until the last couple of days of the month. On the 25th the temperature reached 28. Despite the warm end to the month, July 1980 was the coldest since 1922, and in recent years, although poor Julys have occurred, none of them have approached the dire weather experienced during the first 3 weeks of that very forgettable month.
Posted by London Weather at 02:51 No comments: 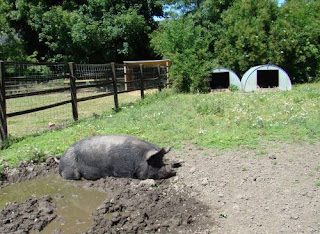 It can be argued that July is the best month of the year even though many of the high temperature records have occurred in August. Looking at the statistics for Morden, these covering the last 22 years, it would appear that day-time temperatures for July are 0.2 degrees warmer than those for August (23.3 against 23.1). Rainfall is 12mm less in July compared with August (43 against 55), in fact in recent years July averages out as the second driest month of the year behind March. All the summer months, along with May, only have 11 days with significant rainfall (0.2mm or more), but it's the subtleties that make July the best month. It hasn't the same number of very chilly days that can often spoil a June (Only 2 of the last 22 Julys have had maximum temperatures below 16, yet 17 Junes have had chilly days including a high of only 11.8 in 1998). August has had 2 years with maxima of 16, but in most years there is a distinct feel of autumn late in the month as the heat from the sun becomes less apparent. So, that's the argument for July, and today is a perfect example. Light winds, a mix of clouds and sun and a temperature of 24. Unfortunately, by Wednesday we'll be seeing the bad side of July weather!
Posted by London Weather at 04:52 No comments: