The other 2 awful Junes 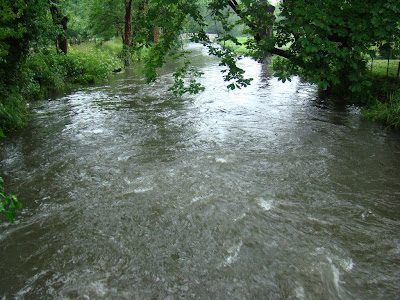 There is the prospect of somewhat better weather during the last week of June, even the chance of temperatures into the high 20s on Thursday. However, overall it still looks like being the 3rd worst June since 1900. The 2nd worst June, 1971, had a mean temperature of 13.5, a value that will be exceeded this June, and it also had 131 mm of rain, a figure that could be exceeded if heavy rain accompanies thunderstorms at the end of the mini heatwave on the 28th. Interestingly, although sunshine amounts were well below average it was not amongst the top 10 dullest Junes. It was a long time ago! Production of the Morris Minor ceased in 1971, decimal currency was introduced and in June the Chancellor of the Exchequer, George Osborne, was just a few days old. June 1903 was  arguably the worst June since 1900. The mean temperature was 13.2, and in southwest London 183 mm of rain fell. It was a dull month, although nowhere near record breaking. The total sunshine for the month was 184 hours, a figure that is unlikely to be reached this month.  In the year 1903 the Daily Mirror was  first published; six years later a rival paper, the Daily Mail, warned that Germany was preparing to destroy the British Empire. The June of 1909 was easily the dullest since records began with only 105 hours of sunshine. So far this June there have only been 87 hours of sunshine, but Germany is a much more generous player on the world stage than in those gloomy days.

Posted by London Weather at 05:29 No comments: Flash flooding and grey cheerless skies are grabbing the headlines, but how bad has this June been so far? With one third of the month gone it is the 8th coolest June since 1900 and the coolest in the area for 35 years. Already it is the 19th wettest since 1900 and the wettest in Morden for 14 years. If the coolness of the month and the wetness of the month are combined, and given equal weighting, it is currently the 6th worst June since 1900. and the worst June in this area since 1991. The top 3 inclement Junes were 1909, a very cool month in which the temperature failed to rise above 11 Celsius on the 6th and it was the 3rd coolest June of the century. It was wet with 87 millimetres of rain falling, although there were 14 dry days. Number 2 was June 1971 when over 130 mm of rain fell at Kew and for parts of the south coast between Devon and Sussex it was already the wettest June on record by mid month! Ironically, for many parts of the country the first week of June was dry and pleasantly warm. The June of 1903 was the wettest of the century with 183 millimetres falling at Kew. Actually, on 20 days no measurable rain fell, however sunshine was in short supply and, apart from a few days at the end of the month it was decidedly chilly. What of sunshine this June? At Heathrow it is averaging just over 2 hours a day, and if this is figure is maintained until the end of the month it will easily be the dullest June on record. However, this poor weather is unlikely to last until the end of the month. Just like the economy, it will improve with time, won't it?
Posted by London Weather at 04:55 No comments: