The Screen has a make over. 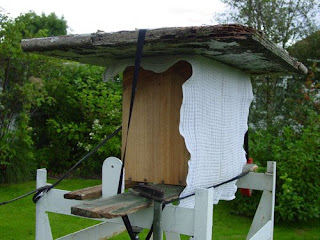 Every now and again the screen housing the thermometers needs renovating. With no spare available, a little improvisation is called for to maintain reliable temperature readings. The 'Official' box, temporarily absent for repair, spent many years housing thermometers on State House, a high-rise office block in High Holborn, London. The block succumbed to concrete rot and has since been replaced, and the 'London Weather Centre' that used to take readings from it's base opposite in Penderel House has long since moved on. The Stevenson Screen, the official name for the louvred 'bee-hive' box was invented by Thomas Stevenson in 1864. He was a civil engineer responsible for the design of many lighthouses but the screen is maybe his enduring legacy. The World Meteorological Organisation recognize the Stevenson Screen as the standard housing for meteorological instruments. It has to be in an open area between 1.25 and 2 metres above the ground. Originally this screen was around 80 metres above street level. It has led a Jeckyll and Hyde existence, perhaps appropriate considering the inventor was the father of Robert Louis Stevenson, the author of The Strange Case of Dr Jekyll and Mr Hyde
Posted by London Weather at 05:16 No comments: 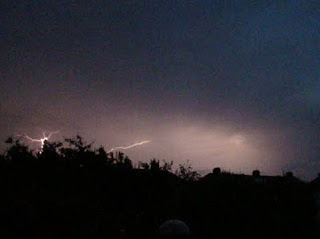 To put it simply, there are 3 main types of thunderstorm in this country. The most common of these is the all-year-round storm which starts with a build up of cloud during the morning, a couple of rumbles from a cumulonimbus cloud in the afternoon, followed by a fine evening. In the winter months this type of storm is usually found on windward coasts. The second type is formed by the destabilisation of the air well above the surface, usually 6,000 feet AMSL or higher. This commonly occurs when cool Atlantic air is about to bring an end to a hot spell. In recent years this form of storm has been fairly uncommon, although one occurred here on the 28th July. The first sign of these type of storms is usually several afternoon reports of thunder from Brittany, followed by a quick migration northeastwards, reaching Southampton in the early evening and London bewtween 9 and 10 pm. For the good folk of Kent last night's storms were closest to the second category. Although very little surface wind blew in association with the storms, it was certainly not true that they were slow moving. In fact the storm clouds were moving at around 35 knots. Rather than one storm lasting a long time, it was a series of storms generating within a band that ran from the East Sussex coast towards Essex. Now, the third type of storm is the 'swing-seat' one. This occurs on a warm summer's evening when several storms develop or move into the area, produce a vivid display of lightning, numerous rumbles of thunder, but are never overhead. Thus, it remains dry and warm, and a free display of nature's power can be observed accompanied by a glass of claret and a packet of peanuts. That was the thunderstorm that occurred over this part of South London yesterday evening.
Posted by London Weather at 05:50 No comments: